If you’re a fan of sporting events or bar food, chances are good that you’ve probably enjoyed a stuffed potato skin or two during football season! Now, here’s a way to enjoy them more often–at home and in a healthful yet equally delicious way. They’re a perfect addition to a Meatless Monday night football gathering. And don’t worry if your game day starts super early. These potato skins are stuffed with eggs; so they’re ideal to savor for a sporty brunch (and a tasty way to boost protein early in the day). Think of them as the best of both–a western omelet and hash brown–all in one fun bite!

Why it’s better for you? Stuffed with veggies and a wholesome egg, not greasy stuff! *Use or store potato flesh for other use, such as for mashed potatoes or creating creaminess in a soup.

**Choose egg size based on potato size. If you have 8-10 ounce potatoes, select medium eggs, for instance. After baking, if the eggs in the potato skins are too runny for your liking when ready to serve, the stuffed skins can be quickly heated in the microwave until eggs are desired doneness. Hi, I'm Jackie Newgent, a classically-trained chef, registered dietitian nutritionist, award-winning cookbook author, and professional recipe developer with a passion for plant-based, low-waste cuisine. I'm delighted to share with you great tasting, good-for-you recipes (also known as "tasteovers by jackie"), created and tested by me in my Brooklyn kitchen. I hope to have a positive impact on your health--and the health of our planet! If you represent a food product or brand that you’d like featured on my recipe blog, just email me directly for details: jackie@jackienewgent.com. 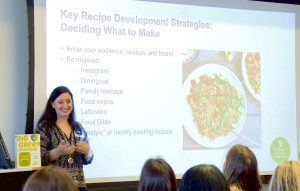