If you don’t already have a favorite fattoush salad, you need this fattoush with heirloom tomatoes in your life. It’s fresh, vibrant, and even fun. And for me, it’s quite comforting.

I know, I know! Leafy salads aren’t usually thought of as comforting. But it is for me since fattoush is the first salad I ate as a child. And it’s the only one I actually liked until I was a teen and started to experiment with “diet” salads. (Yikes!)

While this recipe is my newest version of the salad, it still mirrors what I grew up on. One thing that makes this special (and nostalgic for me) is the flatbread chips. The story goes that as a half Lebanese child who grew up on a lot of Middle Eastern food, my favorite bread was a soft, thin Middle Eastern flatbread (or lavash) that came in really large sheets. In fact, my very first word wasn’t mommy or daddy, it was nan-e. It meant I wanted bread! Fattoush is traditionally made as a way to use stale pita. Hooray! No waste! Since a lot of pita (which was always called talami in my childhood home) that’s readily available can be a bit thick to make good chips, even when it’s split open. So, here I use that soft, thin Middle Eastern flatbread that I’ve loved forever. (Hint: Look for lavash at your local market.) Every eastern Mediterranean region (and beyond) has their own version, but for this particular recipe I used a Persian variety called nan-e sangak (or sangak for short) that I found at Kalustyans (an awesome market in New York). This soft flatbread is almost as long as I am tall! I simply slice some of it up into triangles, toss with olive oil, za’atar, and sea salt, and then bake them until crisp. They act like kind of like croutons … lots of croutons. The rest of this this fattoush with heirloom tomatoes recipe is mostly traditional, including cucumber, tomato, fresh mint, and a lemony dressing. Here, a highlight is heirloom tomatoes which offer color variety — and give this salad a delicious upgrade. Though, it’s totally fine to use whatever tomatoes are your favorite. As for the dressing, I go with a Lemony Sumac Vinaigrette, which is notably tangy from the lemon and sumac (a sour-tasting spice). Don’t have sumac? Add some grated lemon zest in its place. It also has pomegranate molasses. Don’t have pomegranate molasses? Simply simmer some pomegranate juice or tart cherry juice in a small saucepan over medium heat until it’s a syrupy consistency — or use tart cherry juice concentrate. When tossed together, this delightful salad is a standout as a hearty side salad. And if you’re an entrée salad fan, just add roasted chickpeas (see recipe in Notes section below) or falafel (try the falafel patties from my falafel sliders recipe HERE) to it to transform it into your main dish. 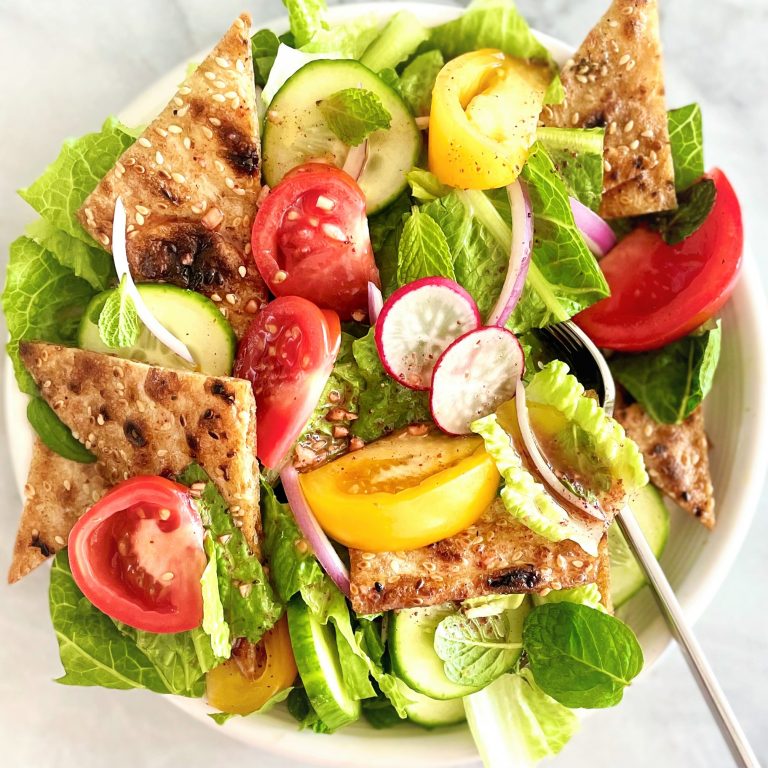 If you prefer, use desired amount of packaged multigrain pita chips in place of the Za’atar Flatbread Chips recipe. Also, you can enjoy this salad with roasted chickpeas instead of or in addition to pita chips to punch up the protein and transform it into an entrée salad. To make roasted chickpeas, I suggest tossing 1 (15.5-ounce/439-gram) can chickpeas (drained and patted dry) with 1 tablespoon extra-virgin olive oil, 1/2 teaspoon za’atar, and 1/8 teaspoon each sea salt and cayenne or black pepper, and then roasting in a 375°F/190°C oven until crisp, about 35 minutes. I wanted pesto, but the basil 🌿 that was growin

What’s better than a butter board? 🧈 That’s

#ad Due to popular demand (by my extended family!)