This sassy recipe for cool peanut soba noodles with grilled sweet peppers is my newest nutty noodle obsession. (I know, I know … I do A LOT of noodle recipes.) But this cool version features a few Jackie-style cuisine tricks to make it extra special. First, it features grilled produce, offering a hint of delicious smokiness. Hopefully you’ve already guessed it’s got grilled sweet peppers … considering they’re right in the recipe name. But there’s also grilled apricot (or peach, if you prefer). It creates the sweet balance in the pureed Asian-style peanut sauce which you’ll make while boiling the soba noodles. And don’t worrry about the sauce tasting like apricots; it absolutely still tastes scrumptiously peannutty! Another trick is how you cool the soba noodles. To conserve water, rather than rinsing noodles under running water, you’ll simply drain the noodles, toss with several ice cubes to cool them, and drain again. It also helps prevent the noodles from becoming waterlogged to keep them as flavorful as possible. The final highlight is unsweetened jasmine green tea. You might not need it, but if you like your noodles to be extra saucy, tea can help thin the peanut sauce to your desired texture without watering down the taste while punching up nutrition. Now, all you do is toss the ice cube-cooled noodles with the peanut sauce, toss with the grilled sliced peppers, and garnish with sesame seeds, peanuts, and cilantro. It’s an awesome salad, salad, or entrée. (For me, it’s definitely entrée worthy!) And if you don’t eat it all at once … no worries. It keeps well in the fridge for several days. But it probably won’t last that long! 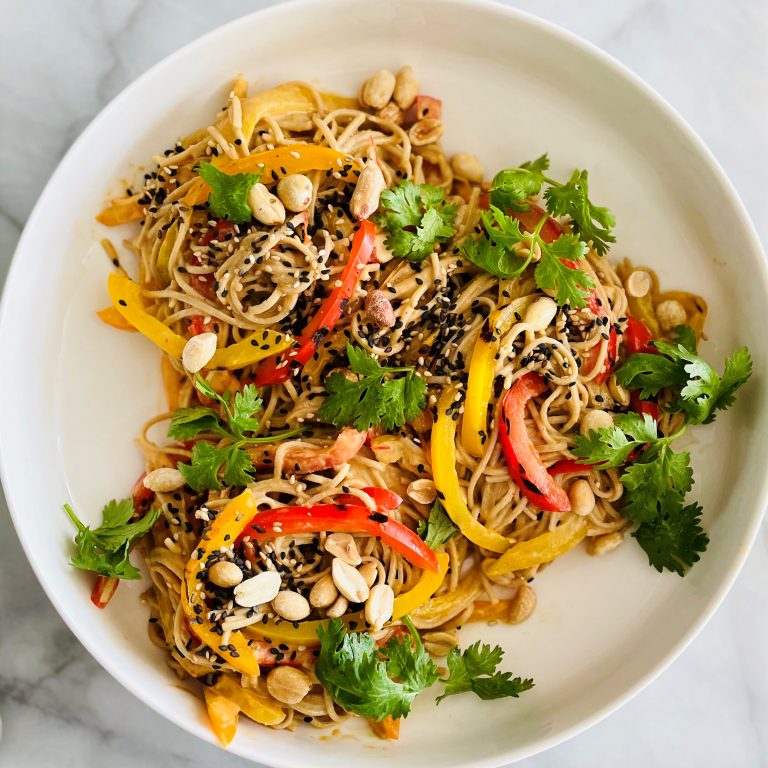 I know, I know … I’ve been posting ZERO new yu